Little kittens are so cute that many cat owners just wish they would never grow up. For many people, a cat that stays small for its entire life is not just cute, but it is also very practical. If you think about adopting a cat, but your living place is not very spacious, getting one of the smallest cat breed pets would be an ideal option for you.

What Is the Smallest Cat Breed?

Smaller breed cats weigh from 5 to 10 pounds, even though their height may vary. They come in a wide range of coat fur types, colors, and other representative features. Following are 13 of the smallest cat breeds, along with their characteristics.

Small Cat Breeds You Can Adopt 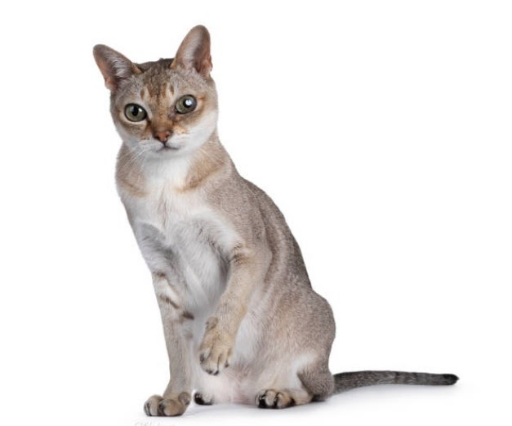 Around half the size of an average cat, the Singapura cat ranks among the smallest cats in the world. They remain kitten-sized throughout their lives; their height ranges from 6 to 8 inches, and they usually don’t weigh more than 5 pounds.

Despite their petite size, Singapura cats are surprisingly active and affectionate and make great pets for families with kids or other pets.

The life expectancy of this smallest cat breed is between 11 and 15 years, and they come only in one color, called sepia agouti, which is a dark brown color with a yellowish ivory background. 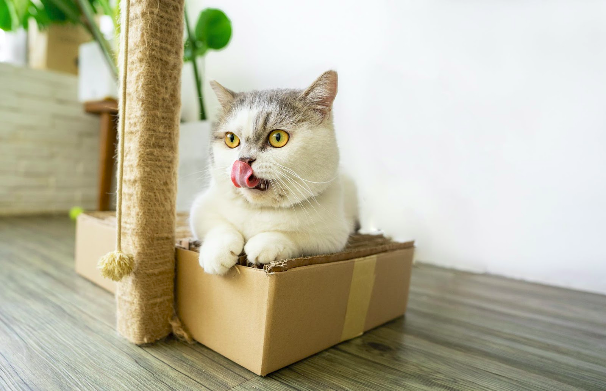 Munchkins are around 6 inches tall and can weigh up to 8 pounds. Their coat length is short, and they come in a wide variety of colors. The average lifespan of this cat breed ranges from 12 to 15 years.

DID YOU KNOW: The shortest cat ever was a Munchkin named Liliput, who measured 5.25 inches. It entered the Guinness World Records on 19 October 2013, when it was 9 years old. 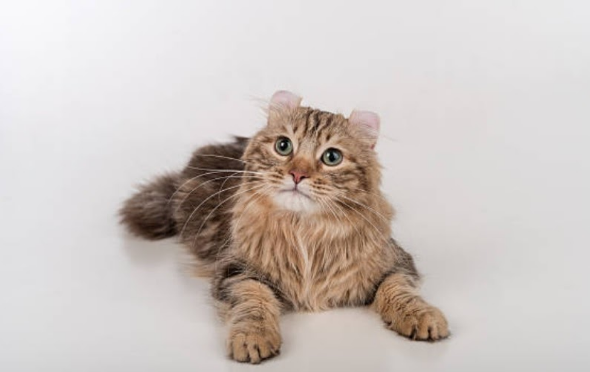 Another small cat is the American Curl. Even though they come in a wide range of sizes due to their diverse gene pool, most tend to be quite small (9-12 in. height and 5-10 pounds weight). They come in a wide variety of colors and hair lengths, and they can live up to 13 years.

American Curls’ most famous characteristic is their backward curling ears, which they’re not born with; they begin to curl back within 10 days after the cats’ birth. These cats are really playful and affectionate and are great with families, as well as with other pets. 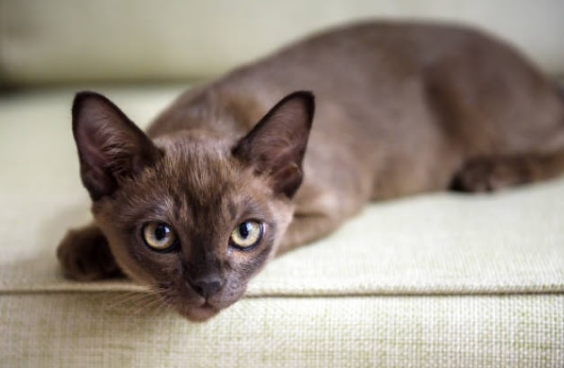 People often confuse the Burmese with the Siamese, but these small cats have a sturdier appearance than the Siamese. They can grow to 10-12 inches and can weigh from 6 to 14 pounds, with a lifespan of 9 to 13 years. Their coat is short, and they come in many colors, but the four colors they are recognizable for are sable, champagne, blue, and platinum.

Burmese cats are really smart, and they can be trained to perform tricks. In addition, they’re great with small children, as they are known for following the kids around the house and being extremely patient with them. 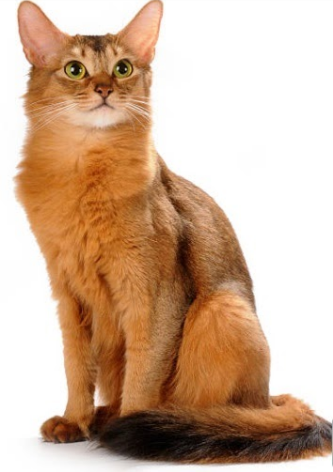 With bright eyes and bushy tails, Somalis are cats that stay small even when mature, but never lose the explosive energy kittens have. They grow from 7-11 inches, weigh 6-10 pounds, and can live up to 13 years. Somali cats have long coats and come in four recognized colors: ruddy, red, blue, and fawn.

These cats are very active and intelligent and are always up for playing and exploring their surroundings. The Somali would be a perfect companion to have in your family home, as they are great with kids, as well as with other animals.

DID YOU KNOW: Apart from being cute and fluffy, Somali cats’ paws have a unique ability: they can hold objects and food in them, as well as open cabinets and cupboards with ease. This small cat breed is so skillful, they could even turn on water faucets with no difficulties whatsoever. 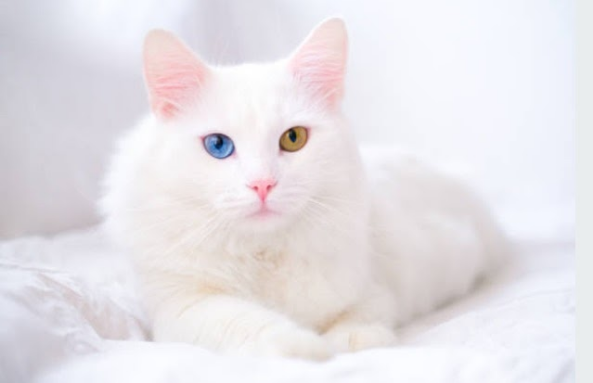 This is an ancient cat breed that is quite rare and is thought to be the breed from which all long-haired cats descended. They can reach a height of 14 inches and can weigh from 8 to 15 pounds. Turkish Angora cats get a lot of attention for their silky hair (mainly white) and eye color, which can be blue, amber, green, or a mismatched combination.

What’s so special about this small cat breed is that they enjoy playing in the water. They are extremely loyal to their owners and have an outgoing personality, which helps them get along well with everyone. Turkish Angora’s average lifespan is between 10 and 14 years. 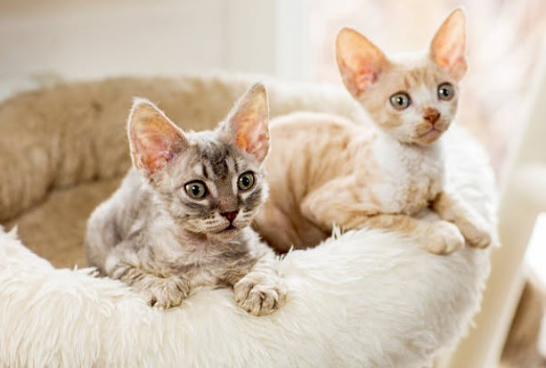 The unusually curly and short coat is the most prominent feature of Cornish Rex cats. They are very active and playful cats, and their hypoallergenic properties make them an ideal choice for cat lovers who struggle with allergies.

Even though they might seem big at first sight, as they stand between 8 and 12 inches, they reach a weight of around 8 pounds and are classified as cats that always stay small. Their faces have prominent eyes and cheekbones, and they come in various patterns and colors, some of them being extremely rare in the cat world.

These cats are known for their big appetite, so make sure you feed them good quality food (especially seniors), to keep them full and healthy. 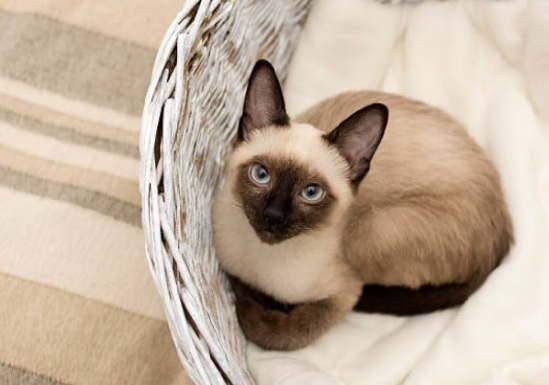 Despite having an average-sized body, Siamese cats are surprisingly lightweight, with a weight range of 5 to 12 pounds. Their most recognizable characteristics are their blue eyes and their 4 types of point coloring – seal, chocolate, blue, and lilac point.

Siamese cats are known for their intelligence, as they can be leash-trained as kittens. These small cats are also recognizable for their excessively vocal nature, and friendliness, as well as for their playfulness.

DID YOU KNOW: The Siamese cat breed is considered to be one of the oldest breeds in the world. They are believed to have descended from felines born in a sacred temple in Siam, which is today’s Thailand. 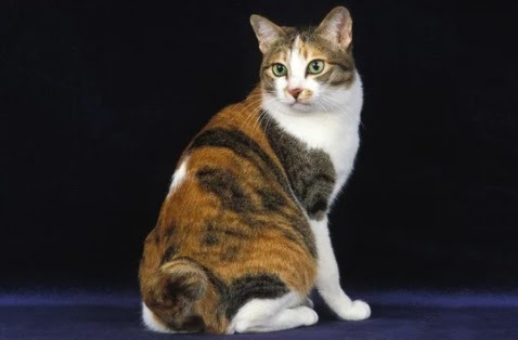 The Japanese Bobtail can reach a weight of around 5 to 10 pounds, and mature to a height of only 9 inches. Its origins are from Asia, and at one time, they were the most common street cat in Japan.

These kittens that always stay small are born with a very short, fluffy tail that doesn’t grow longer than 3 inches, and they come in a wide variety of colors. Japanese Bobtail cats are very active and playful, and they love being around people. These cats have an average life expectancy of 11 years. 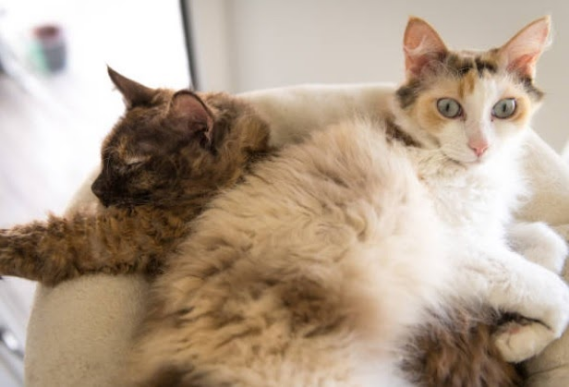 LaPerm cats weigh from 5 to 10 pounds and grow up to 10 inches in height. They are powerful and muscular cats that don’t grow much, and it is best to be kept as indoor cats, as they enjoy receiving lots of love and affection.

LaPerm cats come in various colors (mostly brownish) and can be found in bi- or tri-color patterns. Even though their hair makes them seem like they’re high maintenance, that’s not the case. Brushing them once a week is just enough, as they don’t shed hair much. 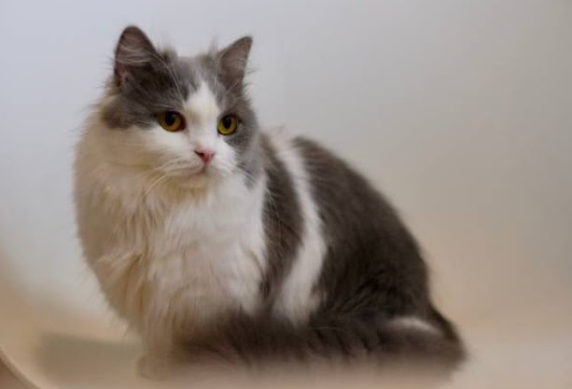 If you’re looking for a tiny, fluffy cat, then the Napoleon breed is the way to go. Even though their fluff might make you think these cats are heavy, with their 7 inches height, they only weigh around 5-9 pounds. But don’t let their petite size and cute appearance fool you; even though they’re gentle and affectionate, they possess a lot of curiosity and energy that requires them to stay active.

Napoleon cats, also known as Minuet, are one of the cat breeds that stay small for their entire lifespan (approximately 15 years). These felines can be found in almost every color and pattern, and they are great with families, kids, as well as with other house pets.

DID YOU KNOW: Napoleon cats are a newer mixed breed that was created from Munchkin and a Persian cat. They first emerged in 1996, and still continue to win many people’s hearts. Napoleon’s short legs are inherited from the Munchkin, while they got their striking appearance from the Persian cats. 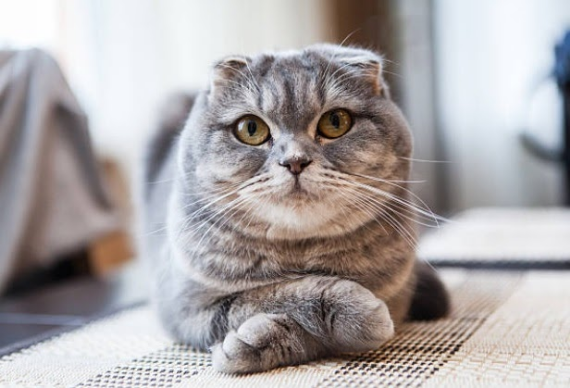 The Scottish Fold looks very similar in appearance to the American Curl, as this breed’s ears are tightly folded, too. It is also sometimes considered the world’s smallest cat breed, and it comes in numerous coat types and colors. They can grow to 8-10 inches in height, and weigh around 6-8 pounds (though males may grow up to 13 pounds).

Scottish Folds have round, fluffy faces, and round eyes, which adds to their cute, even cartoonish appearance. They aren’t extremely active, but they love playing games and exploring, apart from the quality lap time they love spending with their family. 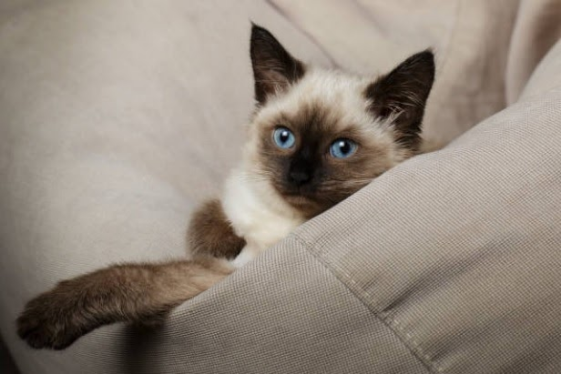 This cat breed shares a lot of features with the Siamese because it is related to it. Balinese cats are, in fact, longhaired, purebred Siamese cats, but they are definitely smaller, with longer coat hair. This is nearly the smallest domestic cat breed, weighing from 5 to 10 pounds and measuring up to 10 inches in height.

Balinese cats are very intelligent, as well as social and affectionate, but at times, they can be loud and pushy, as well. They get along well with people and animals, which is one of the strongest advantages of getting a Balinese cat.

No matter what personality or appearance you’re looking for in a cat, if your wishes or circumstances require getting a tiny cat, there’s no doubt you’ll find exactly what you’re looking for. Getting a small cat is not only practical but their kitten-like looks will make your heart melt every time you look at them.

Are there small cats?

There are many small cat breeds you can choose from, and they’re more common than people think. Some of the most famous representatives are the Singapura, Napoleon, and Munchkin cats – great for anyone looking for a tiny cat that keeps their kitten appearance throughout their whole life.

What is a teacup kitten?

Teacup cats are a size smaller than cats considered miniature, weighing around 6-7 pounds, which is about two-thirds the size of an average grown cat. They are bred to be as small as possible and are sometimes considered to be born too early, hence their tiny size.

What is a micro cat?

Both micro and teacup are terms used to refer to all miniature cat breeds, which are significantly smaller than average cats. More specifically, ‘micro’ is used to refer to any kitten that measures 8” to 10” in height and weighs no more than 7 lbs when fully grown.

How big do Munchkin cats get?

Munchkins are considered small to medium size cats. Male Munchkins weigh between 6 and 9 pounds, while females can reach a weight from 4 to 8 pounds. Both of them are between 5 and 7 inches tall, reaching adult size by the time they’re 1 year old.

How long do miniature cats live?

In general, a representative of the smallest cat breed has a lifespan between 12 and 18 years. Tiny cats are prone to certain health conditions, such as heart or lung problems, or mobility difficulties, and having pet insurance would help you in health emergencies.

How to Break a Weight Loss Plateau in 6 Steps? Why Do Dogs Sleep So Much and Other Sleep-Related Q&A When to Start Using an Exercise Ball in Pregnancy? How to Avoid Loose Skin After Weight Loss in 7 Steps