Sometimes relationships run their course and must come to an end. But that doesn’t mean that ending them is easy. Whether you’ve stopped loving the person or you feel that your relationship has become toxic, you know that you need to put an end to it. But how do you go about it? Unfortunately, there’s no definitive answer. So we’ve created a list of valuable tips to get you through the breakup process to make it a bit easier. 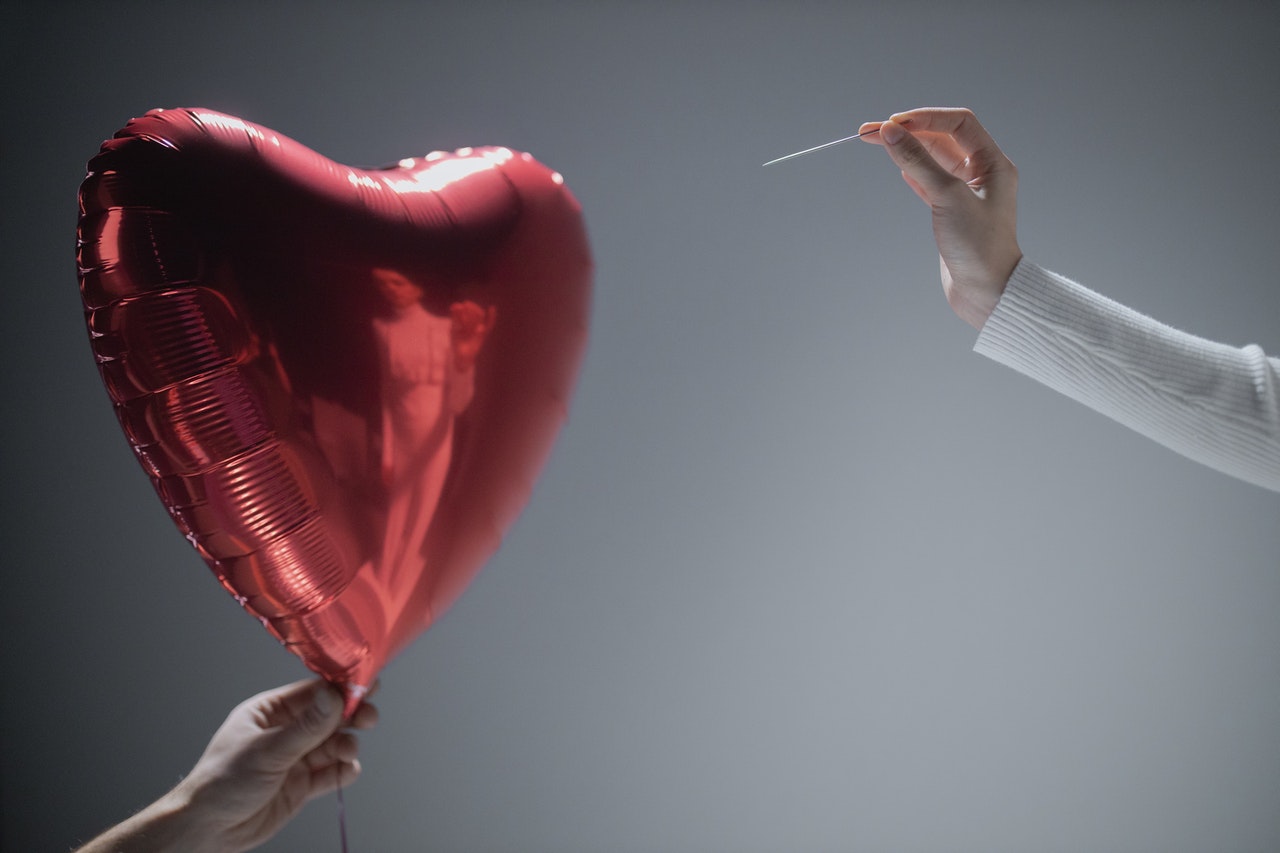 How to Break up With Someone

Breaking up with one you care about is one of the most challenging tasks, but it must be done in some cases. It’s normal to feel anxious and confused about breaking up, and you probably don’t know how to go about it. Although no two breakups are the same—just as no two relationships are the same—the following 11 steps should help you make the process a little less painful.

➱ Make Sure You Want to Break Up

Before ending a relationship, give it some serious thought. Think about if this is really what you want. It’s normal to question your relationship from time to time. But if you’re constantly thinking about breaking up because you’re not getting what you want out of the relationship, it’s probably best if you end it and move on.

➱ Prepare for the Conversation

Once you’ve reached your decision and you’re confident that you want to put an end to your relationship, take some time and think about what you’re going to say. When you’re thinking about how to break up, decide precisely what you want to say. If you’re nervous, it might help to write down your thoughts and practice the conversation beforehand.

➱ Imagine Yourself in Their Situation

Before you break up with your partner, try putting yourself in their situation. Imagine how you would feel if someone wanted to break up with you. How would you like to be treated? Show empathy and acknowledge their feelings to make the ending a little more acceptable to them.

➱ Have the Conversation in Person

Convincing yourself of having an unpleasant face-to-face conversation might be the most challenging part of breaking up with someone. Even though it may feel easier to do so over the phone or via text, you owe it to your partner to deliver the news in person. As a result, you’ll show that you respect and appreciate them and the time you’ve spent together. But if you feel they might get violent and fear for your safety, it may be better to have a virtual breakup.

There’s no perfect place for a breakup, but there are specific places you should avoid. For example, when you’re thinking about how to end a relationship, avoid noisy places, such as restaurants or bars. Instead, you want to have a calm, peaceful conversation and let the other person express their emotions freely. So choose a quiet, intimate setting.

➱ Be Direct and Honest

Honesty is the best policy—especially when it comes to breakups. It may be tempting to take an indirect approach, but you risk the possibility of them not understanding what you’re trying to convey. The best break-up advice is to be direct about what you want, e.g., you want to put a definitive end to the relationship. And be honest about why you want to end it, but don’t go into too much detail.

➱ Focus on the Relationship

During a breakup, it’s easy to get lost in the moment and start casting aspersions. It’s never a good idea to blame the other person, pointing out all their mistakes and flaws. When stating your reasons for the breakup, use ‘I statements’ and clarify that what you’re saying pertains only to you and the relationship. If you wish to know how to break up with someone nicely, don’t accuse them of misconduct in the last moments of your time together, and don’t make them feel like they’re a terrible person.

During a breakup, we experience a broad range of emotions, and your partner is no exception. It’s understandable if they are heartbroken and disappointed, so be prepared to give them the necessary time and space to express their emotions. They will be hurt and might even want to cry. Let them know that you’re comfortable with them expressing their feelings. But don’t change your mind or accept pleas for another chance.

In some cases, you need to learn how to break up with someone you live with and share possessions, even pets. Breakups require even more effort when deciding, for example, who will move out and take care of the pet; who will keep what. Even though this is very difficult, don’t postpone it. It’s best if you discuss everything at once, even if you think there’s no rush. The sooner, the better.

➱ Be Positive About the Time You’ve Spent Together

It’s a good idea to share a few positive sentiments and let them know that you’ll cherish the time you’ve spent together—you don’t want them to feel like you’ve regretted the entire relationship. This is the best way to end a relationship. You don’t want the person you love (or once loved) to think you feel that your relationship was a waste of time.

It’s never a good idea to promise that you could still be friends when you’re breaking things off—although this could still be possible somewhere down the line. When the breakup is still fresh, the best course of action is to cut off all contact, especially when splitting up after a long-term relationship. This might feel like complete rejection on your end, but it will only be more challenging to get over the other person and get over the breakup if you keep in touch.

What to Avoid When Breaking up With Someone

Even though you may be tempted to promise future reconciliation, you could give the other person false hope.

❌ Don’t Blame or Criticize Them

Even if you believe that your partner is solely responsible for the failure of the relationship, you won’t achieve anything by pinning the blame on them or criticizing their personality.

When trying to find the best way to break up with someone, avoid such clichés as ‘It’s not you; it’s me’, which is overused and dishonest.

You may find yourself compelled to have one last kiss or have sex for the last time, but this will only make the separation harder.

The end of each relationship is complicated. So don’t make it any harder than it has to be. Instead, find the best way to break up by heeding the above advice to make the painful process easier for both of you.

Moving on From a Breakup

Once you’ve gone through the breakup process, you need to come to terms that your relationship is over and embrace the single life. But even if you were the one who initiated the breakup, it doesn’t mean that you’re not hurting.

You may understand how to break up with someone, but you also need to learn how to move on. The following points should help you in the aftermath of the breakup.

Grief is expected following a breakup—embrace it and give yourself sufficient time to grieve.

If you’re constantly looking at things that remind you of your ex, you won’t be able to move on. So get rid of all the reminders.

Once you’ve figured out how to leave your partner and have ended the relationship, you shouldn’t keep track of what they do next, including social media stalking.

Following a breakup, dedicate some time to yourself. Don’t start dating immediately afterwards. Instead, spend some quality time with yourself.

Don’t close yourself off to the outside world. Instead, spend time with family, reconnect with friends, and go out and have fun—it’ll make things easier.

Even though you may feel like you’ll never find love again, it’s not true. If you’ve figured out how to break up with someone without hurting them and have ended the relationship, take all the time you need to get over the breakup, and matters will start falling into place when the time is right.

Can a Relationship Work After a Breakup?

One of the most troubling questions we have to face when relationships end is whether or not to remain friends with the person that used to be so much more than ‘just friends’. You may have understood how to leave a relationship, but perhaps you still can’t figure out what to do afterward. Ultimately, it depends on the partners coming to a mutual decision.

You shouldn’t, however, try to be friends immediately after the breakup. Feelings and memories are still fresh, and both of you need time to recover. But once some time has passed, you can give friendship a go if you’re confident that neither one of you still has romantic feelings for the other. (You don’t want to find ways about how to break up a long-term relationship once again.)

Even when you become friends after the breakup, don’t get your expectations too high. Friendships between former lovers don’t always work out.

Relationships are complicated and have their fair share of ups and downs. In some relationships, there comes a time when the negative aspects outweigh the positives—that’s when you know it’s time to leave.

There’s no easy way to look for the best solutions for how to break up with your boyfriend or girlfriend. Our advice, however, should help you gather the courage to put these guidelines into action.

Is it OK to break up over text?

Generally, it’s not considered okay to break up with someone via text, but it might be the best course of action in some cases. For example, if you’re afraid of your partner’s reaction and feel threatened, then that text is probably a good idea.

How do you break up with someone who doesn’t see it coming?

If someone is not expecting the breakup, you should be very cautious. How to break up with someone who has no idea what’s happening is a principal concern. You must make a clean break so that they can grasp what is happening. Be completely honest, and don’t spend too much time discussing it.

How do you know a breakup is right?

If the person you’re in a relationship with no longer makes you happy, and you’re arguing most of the time, you’re probably not a good fit for each other. The same applies if you cannot envision a shared future. The relationship then has become pointless, and it’s time to break things off.

5 Must-Have Spiritual Tools You Can Use for Daily Spiritual Practices Why Do I Twitch When I Sleep? [Common Reasons Explained] What Is Past Life Regression & How to Do It 7 Symptoms of Negative Energy at Home