In this guide, we’ll focus on their speed, providing answers to how fast does an electric scooter go, what its speed depends on and whether you can do anything to enhance it. Keep reading for all the essential information! 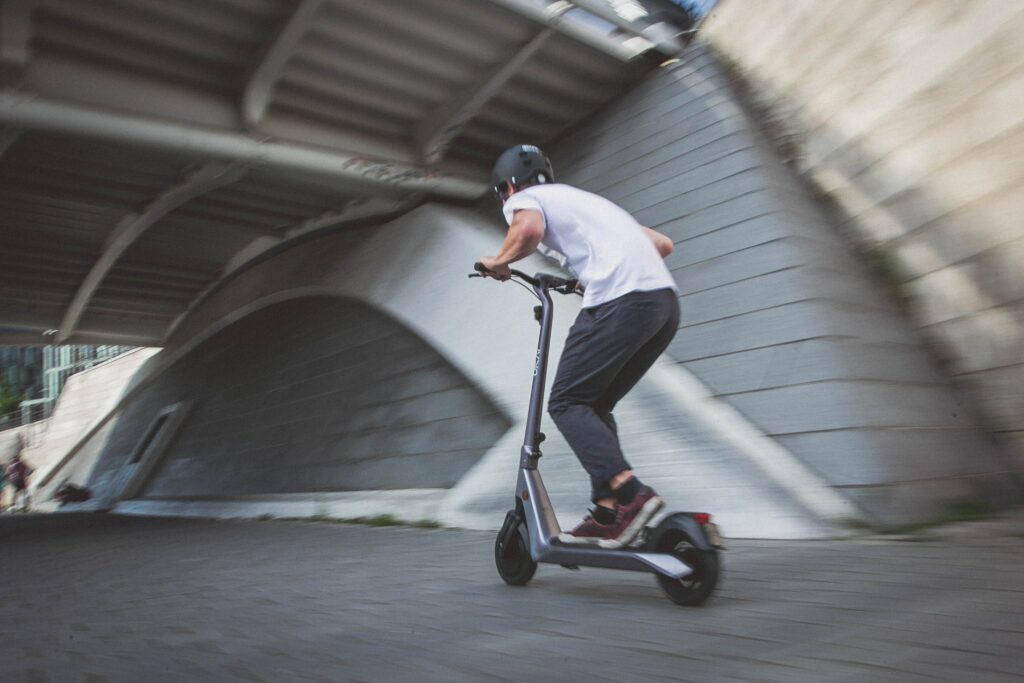 How Fast Does an Electric Scooter Go?

Electric scooters have varying speed levels, so there’s no single answer to how fast these scooters can go. The speed range depends on multiple factors such as the scooter brand and the scooter model, but on other factors as well, which we’ll get to later.

Below, you can read about the average top speed of most electric scooters.

The electric scooter average speed ranges from 15 to 30 miles per hour, which is between 24 and 48 kilometres per hour. Each scooter has a maximum speed limit—the average top speed for most scooters for commercial use is set at 20 mph/32 kph, while those that can reach 48 kph m are considered high-powered scooters.

However, scooters at these speeds are considered unsafe for public use, and you’re not allowed to ride them on public roads.

There are different types of electric scooters, and although different things can influence speed, price is an important factor. In the UK, electric scooter prices range from £100 to £1000, and as you might’ve supposed, the cheaper the scooter, the lower the speed.

If you’re looking to buy an electric scooter for adults, we suggest looking at models priced above £250.

So, how fast do electric scooters go if you buy them on the cheaper side? Well, if you’re buying a scooter in the £300–£600 range, you can expect a maximum speed of 15.5 mph/24 kph. If you’re buying one of these affordable scooters, you won’t reach any higher speeds, and we don’t advise you to try—much like motorcycle accidents, e-scooter accidents can be dangerous and life-threatening.

As you might already know, the legality of electric scooters in the UK is still under question. For the time being, the government has introduced e-scooter trials and imposed a speed limit.

In most areas where you’re allowed to ride one of the government’s rental scooters, the speed limit is set at 15.5 mph, so it comes as no surprise that the speed of an electric scooter for commercial use in the UK is capped at 15.5 mph.

However, the government has deemed that even 15.5 mph is too fast for some areas, especially in London—instead, the speed in these areas is capped at 8 mph. If you’re a scooter owner and you want to go on a faster ride, you can do so on private property and only with the landowner’s permission!

Electric Scooters Speed: What Does it Depend On?

Although we’ve already given you some numbers on the electric scooters’ average top speed, their speed may be affected by various factors. Below, you can read about all the things that can affect your scooter’s speed.

The electric scooter motor is probably the most important speed-determining factor. While some scooter models have smaller motors that won’t allow for high speeds, others have more powerful motors, and some even have dual motors that allow for much higher top speeds.

Electric scooters have a rechargeable battery, making them an eco-friendly transportation method. However, the battery charge can affect the speed of the electric scooter—if the battery charge is low, the motor won’t be able to compensate for the lack of power, and the scooter won’t be able to achieve top speed. However, this is easily solved with a battery recharge.

As is the case with all other modes of transportation, the tires play a large role in the speed and overall performance of the vehicle. Generally, e-scooters with taller and wider tires are faster than those with small tires. Plus, the larger the tires, the smoother the ride—these scooters have an easier time going over curbs, bumps, and potholes.

The tire pressure can impact the speed as well—if a tire has gone soft, the scooter won’t be able to reach top speed, and it may even reduce the riding range.

How fast can an electric scooter go very often depends on the terrain. If the terrain is smooth, like well-kept public roads, the scooter can easily reach the maximum speed imposed by the manufacturer.

However, if you need to cross a bumpier road or a steeper hill on your scooter, your speed will be significantly reduced. If you plan on riding your scooter on rougher terrain, make sure to choose one of the high-powered scooters available on the market.

And last but not least, the rider’s weight can influence the speed as well. Heavier riders can’t achieve the same top speed as some lighter riders, or the scooter might take longer to accelerate to the top electric scooter speed with a heavier rider.

Manufacturers state the maximum load for each scooter model, so you can choose a model according to your weight to be sure your weight won’t affect the speed.

Is the Speed of Electric Scooters Limited?

At this point, you’re aware of the speed levels of electric scooters available on the market, but you may wonder whether they’re capable of achieving higher speeds. Well, to answer your question—most scooters for commercial use can actually achieve higher speeds.

Each manufacturer puts a speed limit on e-scooters. On the UK market, scooters have a built-in speed limiter and the speed is capped at 15.5 mph, which is also the legal speed limit for e-scooters. These limits are imposed for the riders’ safety, but they’re also a good strategy for the manufacturer to avoid liability for any accidents that may occur due to the electric scooters speed.

When picking out a scooter model, don’t focus solely on speed—look at the riding range, the battery capacity, weight capacity, and anything else of importance to you.

Can You Make an Electric Scooter Go Faster?

Now you know how fast can an electric scooter go and what all the ways to enhance its speed are, you can use this information to make your best pick—just make sure to stay safe.

We’ve given you all the essential information regarding the speed of the electric scooters sold on the UK market, but before we let you go, here are some important tips on how to safely ride an electric scooter:

Knowing how fast do electric scooters go isn’t the only thing that matters—you also need to know how to operate an electric scooter responsibly, ensuring the safety of you and those around you.

Although they’re not the fastest option available, electric scooters are a quick and eco-friendly mode of transportation great for travelling small distances.

Hopefully, this guide has managed to give you a clearer picture of how fast electric scooters can travel and what speed limits you need to adhere to. Happy riding!

What is the maximum speed of an electric scooter?

Can an electric scooter go 30 mph?

There are several scooter models that have a top speed of 30 mph and they’re available for purchase in the UK.

Is 10 mph fast for an electric scooter?

Scooters that reach 10 mph are considered quite slow and not the best choice for adults—they’re suitable for children above 8.

Can You Sell a House With a Mortgage in 2022? Types of Houses [Structural & Architectural House Types] What Makes a Promissory Note Invalid & How to Prove Validity How Much Do Mobile Homes Cost & Should You Buy One in 2022