Facebook is rolling out a new feature that lets group administrators appoint certain members as a “Group Expert,” as announced on Facebook Community on July 13.

According to the announcement, over 70 million administrators and moderators are managing the overwhelming number of groups on Facebook. These communities consist of people with a shared passion or interest in the same topics, whether that’s fitness, plant care, technology, or literally anything else—there’s a Facebook group for everything.

However, as a group grows and attracts new members, it can be difficult for members knowledgeable on the topic to stand out and share valuable information with the rest. With the Group Expert feature, group administrators can invite knowledgeable members of the group to accept a badge, making their role in the group more impactful and meaningful. Ultimately, the decision will be up to the member, who will be able to accept or reject the Group Expert badge.

The badge will be displayed on their posts, comments, and in the new Q&A feature.

Potential group experts can also be found outside the scope of the group. Facebook, which recently became part of the $1 trillion club, has decided to test the option of inviting non-members to join a group and become a Group Expert. Currently, the feature is limited to the fitness and gaming communities.

Many people get information through social media, especially Facebook. An average American spends 1 of every 5 minutes on mobile on Facebook, so it’s essential that the information they learn there is valuable.

As groups contain posts by people with different backgrounds and intentions, it opens the door to sharing incomplete and inaccurate information. The Group Expert feature will hopefully highlight accurate information from trusted sources. 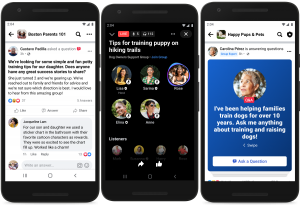 Group experts can host Q&As to educate and engage with other members of the group while answering questions in real-time. According to Facebook, “Answered questions are featured in an interactive, swipe-able stack, while all questions may be viewed in the Q&A’s comment section.”

Another feature that would enable members to share ideas is Live Audio Rooms. Using this feature, group experts and regular members will be able to form different audio rooms to discuss topics of their choice. It’s similar to Messenger’s video group calls, which Facebook introduced in 2016. Live Audio Rooms will be available by the end of the summer.

Finally, when a member asks a question, it will be upgraded to a new format more suitable to encourage people to share their advice, support, or helpful information.